Switch to the dark mode that's kinder on your eyes at night time.

Switch to the light mode that's kinder on your eyes at day time.

Switch to the dark mode that's kinder on your eyes at night time.

Switch to the light mode that's kinder on your eyes at day time.

Japanese fighter pilot Lt. Col. Takamichi Shirota says his country is under increasing pressure from the air. Analysts say it’s a pressure faced by few other nations.More than twice a day, Japanese fighter pilots hear a siren blare, bolt up from their ready-room seats, run to their jets, and scream aloft, ready to intercept apotentially unidentified incursion into Japanese airspace.It happened to Japan’s Air Self Defense Force (JASDF) 947 times in the last fiscal year ending in March. The culprit in most of those cases, warplanes from China’s People’s Liberation Army Air Force (PLAAF).And Shirota says the number of potential incursions is growing.

“The number of scrambles against airspace violations has been increasing rapidly over the past decade — especially in the southwest air zone,” said Shirota in an exclusive interview with CNN. “About 70% of the scrambles done by Japan’s SDF annually are conducted in this area.”That southwest area includes the Senkaku Islands — known as the Diaoyu Islands in China — a rocky, uninhabited group of islands under Japanese administration but claimed by China as its territory.It also includes Okinawa, home to the United States Air Force’s Kadena Air Base, which touts itself as the “Keystone of the Pacific” and is a key US installation for flights over the contested waters of the South China Sea.Japan’s Defense Ministry in March released a map showing the flight routes of Chinese and Russian aircraft that Japan’s fighter pilots rose to intercept. The Chinese flight routes are shown in red. Their density makes the East China Sea, the part of the Pacific Ocean between China and Japan’s southern islands, look like a sea of red.The Chinese flights don’t violate international law. Of the 675 times Japan’s fighters scrambled after Chinese planes in the last fiscal year, not once did the Chinese aircraft fly within the internationally recognized 12-mile territorial limit, according to the Japanese Defense Ministry.And even then, China says the presence of its forces within the Senkakus/Diaoyu island chain is within its sovereign rights.”Diaoyu island and the affiliated islands are China’s inherent territory, China is resolute in safeguarding our territorial sovereignty,” Zhao Lijian, a spokesperson for China’s Foreign Ministry, said in June.The Chinese Foreign and Defense ministries did not respond to CNN requests for comment on this specific Japanese report.Still, Japan says Chinese planes often intrude into its Air Defense Identification Zone (ADIZ), which can vary in size depending upon location.The US Federal Aviation Administration defines an ADIZ as “a designated area of airspace over land or water within which a country requires the immediate and positive identification, location, and air traffic control of aircraft in the interest of the country’s national security.”Shirota, the 40-year-old commander of the JASDF 204th Tactical Fighter Squadron at Naha Air Base on Okinawa, has his pilots on alert 24 hours a day, 365 days a year, to do just that.”The Air Self Defense Force is the one and only entity able to protect Japan’s territory and airspace,” he says.And though there have been no shooting incidents with the Chinese planes, it’s always a tense job, Shirota says.”We wait on guard on the ground all the time in tension,” the Japanese pilot says. “The same said while we are in the sky. We keep the motivation high all the time.”Because we never know what we will face once we go up in the sky. We might see them (Chinese aircraft) leaving, or we might face off,” he says. 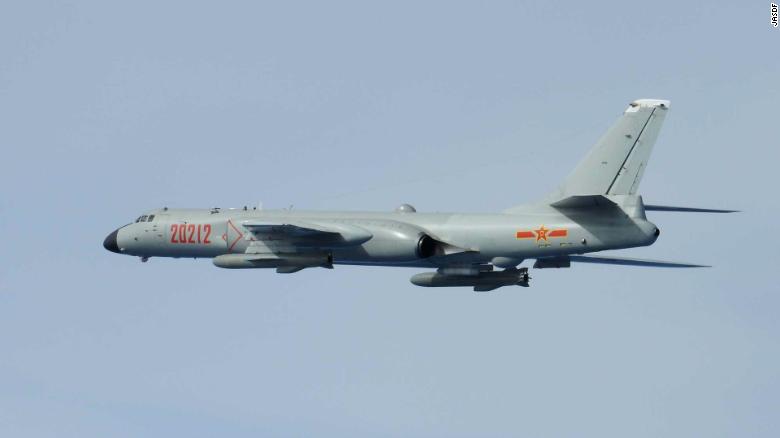 Chinese H-6 bomber photographed by Japanese fighters on June 28, 2020.The readiness of the Japanese pilots is remarkable when you consider their burden. No Western air force comes close to Japan in the number of times their fighter jets scramble against potentially hostile aircraft.The air forces of the 27 European members of the North Atlantic Treaty Organization (NATO) combined flew fewer than half the intercepts last year than Japan did.”I can tell you that over the 12 months period of 2019, NATO jets took to the skies approximately 430 times to intercept or visually identify unidentified aircraft that flew either in, close to, or towards NATO airspace,” Lt. Col. Michael Wawrzyniak, chief public affairs officer for Allied Air Command in Germany, told CNN.Across the Atlantic, US and Canadian fighters under command of NORAD, the North American Aerospace Defense Command, has averaged just seven intercepts a year of Russian aircraft since 2007, said Capt. Cameron Hillier, a spokesperson for NORAD and the US Northern Command in Colorado. Some years, US and Canadian fighter jets haven’t had to scramble at all.Japan has seen no such respite. Using the same 2007 time frame as NORAD, even in its slowest year, 2009, Japan scrambled its fighter jets more than 200 times. 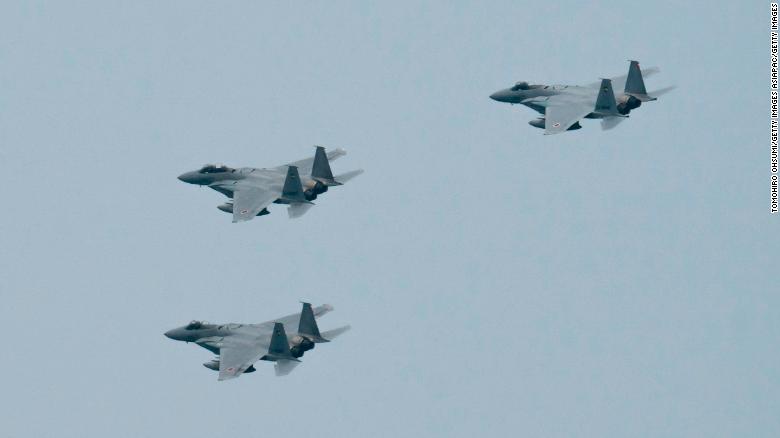 Japan’s Air Self-Defense Force’s F-15 fighter jets fly during a review after the graduation ceremony of the National Defense Academy on March 22, 2020 in Yokosuka, Japan.Analyst Peter Layton, a former Royal Australian Air Force pilot now with the Griffith Asia Institute, believes the pressure China puts on Japan by air is part of a larger plan.”I think China wants to keep the JASDF off-balance and reactive, wear out its aircraft and air crew, gain training and keep the pressure up daily on who owns the disputed islands,” Layton told CNN.In a commentary last year written for The Interpreter blog from Australia’s Lowy Institute, Layton detailed just how far the Chinese flights stretch the JASDF, and how China has the resources to push Japan to limits it may not be able to reach.”The JASDF’s fleet of some 215 F-15J aircraft bears the brunt of scramble tasking,” he wrote.”Since 2016, the JASDF have often launched four aircraft for each scramble.”These daily scrambles are gradually wearing the F-15J fleet out. The concern is that China has some six times more fighters then the JASDF, and could further ramp up intrusions whenever it considers appropriate. The in-service life of Japan’s F-15J fleet is now almost a decision that lies with China,” Layton said.

Layton told CNN that Tokyo cannot back down, however.”The Japanese believe they need to respond every time as to do otherwise might be interpreted as being less committed to territorial ownership,” he said.And Japan is stepping up its responses to possible Chinese threats.A Defense Ministry official said Japanese fighters are now scrambling as soon as Chinese planes take off from their mainland bases in range of the Senkakus. They had previously waited until Chinese planes headed toward Japanese airspace. 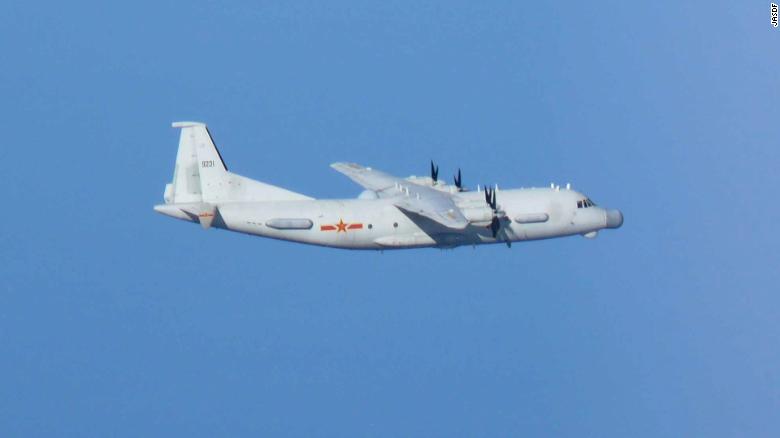 Chinese Y-9 photographed by Japanese fighters on December 27, 2019.In its 2020 Defense White Paper published this month, Tokyo noted Beijing’s pressure around the Senkakus.”China has relentlessly continued unilateral attempts to change the status quo by coercion in the sea area around the Senkaku Islands, leading to a grave matter of concern,” it said.”The Chinese Navy and Air Force have in recent years expanded and intensified their activities in the surrounding sea areas and airspace of Japan, and there are cases involving the one-sided escalation of activities,” the White Paper said. 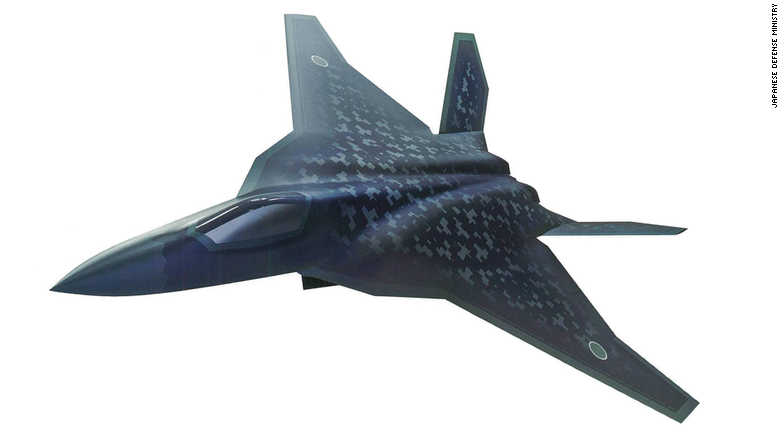 A sketch of Japan’s planned F-3 stealth fighter.The document notes what Japan is doing to meet the challenge, with new fighter jets, like the stealth F-3, in the planning stages. Japan has also begun receiving US-designed F-35 stealth fighters, considered as good as, or better than anything China can put up at the moment.But the F-3 is years away from the assembly line and the F-35s won’t come in the kind of numbers that can put much of a dent in China’s advantage there.So the burden will fall to Shirota and his fellow aviators.”Japan is surrounded by the sea. So the invasion comes from either the ocean or the sky. If the invasion comes from the air, it will happen all very fast,” he says.”Securing the air defense is directly linked to protect Japan, the lives and assets of the Japanese people,” Shirota says. “I am full-heartedly serving my duty as an Air Self Defense Force officer with strong will to protect Japan.”

Get the best viral stories straight into your inbox!

What do you think?

Sorry. No data so far.

Don’t miss out on new posts

Hey Friend! Before You Go…

Get the best viral stories straight into your inbox before everyone else!

Get the best viral stories straight into your inbox!